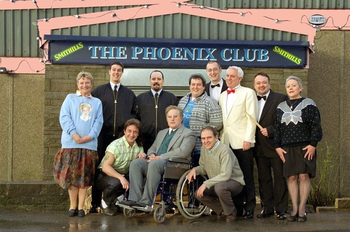 Phoenix Nights is a Brit Com starring Peter Kay. It revolves around the Phoenix Club, a run-down, scabby social club in Bolton. The owner is Brian Potter, a wheelchair-bound egomaniac currently on his third club (his first two closed down due to flooding and burning, respectively) but who is convinced that "Clubland will never die". Together with his hapless band of staff and regulars- most notably his long-suffering second-in-command Jerry St.Clair- Brian attempts to make the Phoenix Club the number one club in Bolton, despite rival club owner Den Perry, an extremely bad run of luck and their own ineptitude.

It later got a Spin-Off, Max and Paddy's Road to Nowhere.