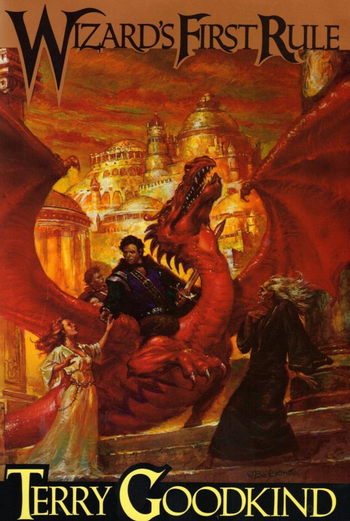 "People are stupid; given proper motivation, almost anyone will believe almost anything. Because people are stupid, they will believe a lie because they want to believe it's true, or because they are afraid it might be true. People's heads are full of knowledge, facts, and beliefs, and most of it is false, yet they think it all true. People are stupid; they can only rarely tell the difference between a lie and the truth, and yet they are confident they can, and so are all the easier to fool."
— The Wizard's First Rule
Advertisement:

A series of High Fantasy novels — ahem, stories that have important human themes—written by Terry Goodkind. It started in 1994 with the publishing of Wizard's First Rule and ended in 2007 with the eleventh in the series and final book of the Chainfire trilogy, Confessor. There is also a prequel novella, originally published in the Legends compilation of short stories and now available on its own, called Debt of Bones. In story-internal order, the books are as follows:

In addition to these books, Terry Goodkind has written other novels related to the main Sword of Truth series. The Law of Nines serves as a sequel of sorts to the main series and features an entirely new cast of characters. The Omen Machine, billed as "A Richard and Kahlan Novel", takes place immediately after Confessor, but is not connected to the Myth Arcs of the previous series. The First Confessor is a self-published e-book which features events in the backstory of the main series.

After the conclusion of Warheart, the main series ended. However several side characters received a spin-off series of sorts, titled The Nicci Chronicles. That series follows the adventures and tribulations of Sister Nicci and Wizard Nathan.

The TV adaptation, called Legend of the Seeker, has its own page.

Richard Cypher is a woods guide living in a mostly-pastoral nation called Westland, cut off from the rest of the world—known to them as consisting of two other lands, called the Midlands and D'Hara—by a magical boundary that is in fact a window to the underworld; all who enter it die. After coming upon an "odd-looking vine", he spots a mysterious and beautiful woman who appears to be chased by four armed men. Offering to help her, he finds she is being trailed by assassins.

She explains that she has come in search of a great wizard, who supposedly came to Westland years ago, to help defend the Midlands against a man named Darken Rahl, who hopes to bring all the world under his dominion. Richard knows that what she says is impossible; nothing can get through the boundaries, and Westland doesn't have any magic. Yet he has never seen a woman like her, nor men like those hunting her. He decides he should take her to Zedd, a slightly crazy old man who is like a grandfather to him, and who always seems to know everything that goes on...

As you might have guessed, Zedd does, indeed, turn out to be the wizard, and the three characters team up to stop Darken Rahl before all is lost. Richard is given the titular Sword of Truth, which uses the power of its user's personal anger to strike down enemies.

The two first books, Wizard's First Rule and Stone of Tears, are fairly standard fantasy fare, complete with dragons, an evil wizard out to rule the world, the discovery that he wasn't working for his own sake, a potentially world-ending plot, a magic sword, a wise old wizard, a mysterious woman with strange powers, and a gratuitous S&M sequence. For a long time some people thought Goodkind was ripping off Robert Jordan, as his stories contained many things that had exact counterparts in Jordan's novels. From the third book on, things get slightly less derivative, with the introduction of a new Big Bad and increasing focus on Richard's struggles as a leader. By the fourth book the plot is still pretty standard but starts going under its own power.

Around the fifth book, Goodkind began introducing overtly Objectivist themes and aesops inspired by Ayn Rand in the Sword of Truth. Things went overboard in the eighth book, Naked Empire, which contains the infamous evil pacifist plot. The last three books, collectively called the Chainfire Trilogy, brought back plenty of the early themes and events of the series, and Confessor, the last book, was specifically one huge throw-back to Wizard's First Rule.

Goodkind has stated a distaste for cliffhangers and other ways of forcing people to buy future books, which is why, aside from the Chainfire trilogy, the books have mostly self-contained plots; some new danger is introduced, the characters wonder about its meaning, and it is defeated. However, all of these book-plots are tied by the Myth Arc of either the Imperial Order or the Keeper of the Underworld.

There's also a spin-off book, The Law of Nines, which follows a completely different cast of characters and shifts genres from High Fantasy to a contemporary thriller with fantasy elements. It takes place in the magic-free world created at the end of "Confessor", the inhabitants of which developed technology to replace the magic they had lost. The story follows the exploits of Alex Rahl, a distant descendant of Richard's half-sister Jennsen, whose life is changed forever when he meets a woman named Jax who claims to be from a parallel universe where magic still works.