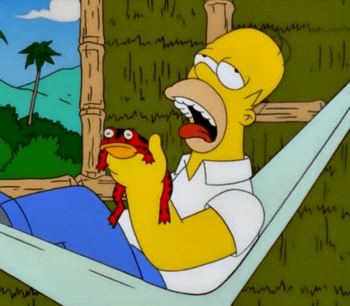 Turn on, tune in, toad out.
"I'd like to remind all my readers, especially you impressionable young people, that if you must lick a toad, make sure it's wearing a condom. Thank you."
— Dave Barry
Advertisement:

Licking the backs of toads to get high.

Based on an Urban Legend dating as far back as The '70s, groups of hippies and teenagers were alleged to have been licking specific species of toads which secrete psychoactive compounds through their skin that can cause hallucinations.

While there are toads that do secrete such chemicals, licking it off a toad itself is very dangerous (they are toxins to deter predators after all, coupled with an easy case of salmonella) and will cause some serious poisoning for anyone considering a pursuit to get high in such a fashion in Real Life (or in layman's terms, Don't Try This at Home).

In fiction, the psychoactive toad is commonly used as a G-Rated Drug.

Sonic and Luigi goes to stop Frogger from causing traffic jams, but Luigi decides to do a little taste test.

Sonic and Luigi goes to stop Frogger from causing traffic jams, but Luigi decides to do a little taste test.