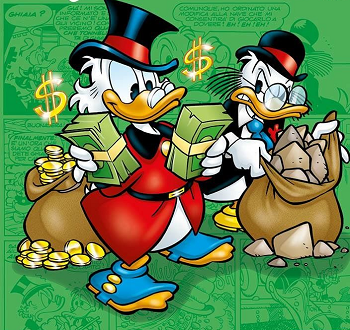 The meek beget riches, the wicked beget failure.
"When I despair, I remember that all through history the ways of truth and love have always won. There have been tyrants, and murderers, and for a time they can seem invincible, but in the end they always fall. Think of it — always."
— Mahatma Gandhi
Advertisement:

The Big Bad has just finished consolidating his power or conquering nations, or maybe he's had a few decades to construct a Dystopia, and all seems to be going well for him. The plucky heroes are trying to bring him down, but he's on a roll, and no one's going to stop him now... except maybe himself.

Suddenly his subjects seem a bit less cowed by his killing and imprisoning their loved ones, and his every effort to bring them in line just make things worse. One or two of his plans don't quite go off as expected, thanks to infighting between his lieutenants. And maybe his paranoia is getting the better of him, and he's starting to let slip the civil facade that keeps him from being an utter monster.

At the end of the day, the villain's downfall comes not just from the efforts of the heroes, but also from the very nature of the villain's twisted, amoral way of life. Without that specifically being addressed, this would just be Justice Will Prevail.

This trope is rather rare, only appearing in odd mixes of realism-meets-idealism. On the one hand, it may seem naive to imply that a system won't work just because it's morally offensive. On the other hand, there is no perfect Evil Empire in history like the ones we often see portrayed in fiction, because simply put, nothing is perfect. Just as a Stepford Suburbia rubs us the wrong way in their eerie sense of too-perfect "goodness," a completely devoted following of faceless foot soldiers in a well oiled machine of an empire ruled by a tyrant with complete control over his subjects smacks a bit of fairy-tale "evil."

Ultimately, this is a trope in a story that reminds us that battles aren't always won by the genius of the victorious general, but also the mistakes of the defeated one. Note that this doesn't have to be about a large group of evil: it could just as easily be an individual. Whether it's an excess of Greed or Pride that does the villain in, valuing negative-sum interactions, a mentality of always defecting on the Prisoner's Dilemma, or the simple fact that victims of oppression will eventually rebel, Evil as a lifestyle or system cannot endure.

Super-Trope of Villain Ball, No Honor Among Thieves, Dystopia Is Hard, Sanity Has Advantages, and Enemy Civil War. A more specific version is Hoist by His Own Petard. Similar to, but distinct from, Wins by Doing Absolutely Nothing.

Inversion of No Delays for the Wicked. Aversions can be examples of Evil Virtues, Pragmatic Villainy, or outright Karma Houdinis. Compare Fascist, but Inefficient and Being Evil Sucks.