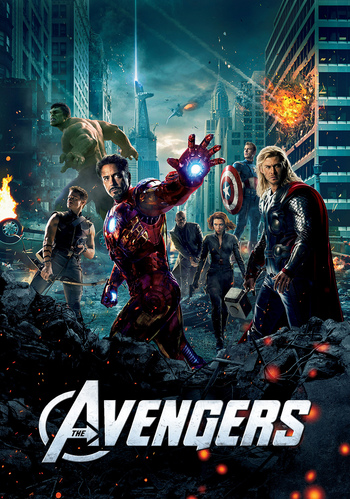 Some Assembly Required.note From left to right: Hawkeye, The Hulk, Iron Man, Nick Fury, Black Widow, Captain America, and Thor.
"There was an idea [...] called the Avengers Initiative. The idea was to bring together a group of remarkable people. See if they could become something more. See if they could work together when we needed them to, to fight the battles that we never could."
— Nick Fury
Advertisement:

The Avengers (known as Avengers Assemble in the UK and Ireland and Marvel's The Avengers so as to not cause confusion with a similarly-titled Sixties Spy Fiction series) is a 2012 Live-Action Adaptation of The Avengers comic book directed by Joss Whedon (Buffy the Vampire Slayer, Firefly) and produced by Marvel Studios. It is the sixth film in the Marvel Cinematic Universe, and the last installment of its Phase 1.

The story revolves around the heroes of the first five Marvel Cinematic Universe films (Iron Man, The Incredible Hulk, Iron Man 2, Thor, and Captain America: The First Avenger) banding together to form the eponymous super team as they tie up several unresolved plot threads from those movies.

Warning: Unmarked spoilers for the previous films below.

Following the end of Captain America: The First Avenger, S.H.I.E.L.D. has recovered the Tesseract, an Asgardian relic they hope can serve as a source of infinite energy. However, their experiments with the device attract the attentions of Loki, the Big Bad of Thor, who promises the Tesseract to a third party in exchange for an army to conquer the Earth.

An eight-issue prequel comic, The Avengers Prelude: Fury's Big Week has also been released, tying up loose ends from all the previous movies and setting the stage for this one. A second prequel mini-series focusing on Black Widow's activities leading up to the movie was also released.

If you're looking for the 1998 film based on the British TV series The Avengers, that's over at The Avengers (1998).

The Avengers assembles all of its tropes into the following subpages:

"All right, hey! Hooray, good job, guys. Let's just not come in tomorrow; let's just take a day... Have you ever tried shawarma? There's a shawarma joint about two blocks from here. I don't know what it is, but I wanna try it."
Feedback