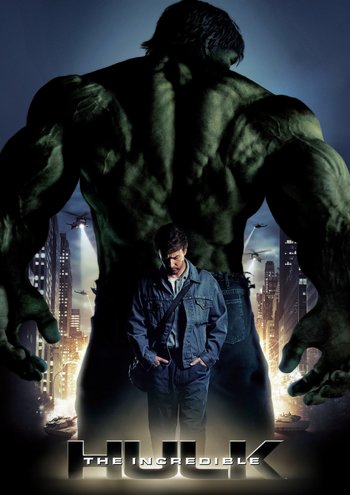 Our only hope is something... incredible.
"As far as I'm concerned, that man's whole body is property of the U.S. army."
— General Thunderbolt Ross
Advertisement:

The Incredible Hulk is a 2008 film based on the character of the same name directed by Louis Leterrier (The Transporter, Unleashed); following the trend of rebooting a franchise rather than creating a sequel to an unpopular first effort, this film takes place in a different continuity from the 2003 version and is the second movie in both the Marvel Cinematic Universe and its Phase 1.

The story takes place five years after the tragic accident which created the Hulk, glimpses of which are seen in the opening credits. Bruce Banner (Edward Norton) has taken refuge in Brazil as a worker at a bottling plant, where he keeps a low profile and works on controlling his anger in his spare time. When Bruce accidentally spills blood into one of the bottles, a man falls ill from Gamma poisoning by drinking it, which is the clue General Ross (William Hurt) uses to track Banner down. Along for the ride is Emil Blonsky (Tim Roth), who is destined to become one of the Hulk's deadliest foes: the Abomination.

Due to legal issues with Universal Studios (who own the rights to solo-Hulk films), this film is the only Phase 1 Marvel film to have not gotten a sequel. Even worse, when the Hulk next appeared in The Avengers alongside Iron Man, Thor and Captain America, he was recast with Mark Ruffalo (instead of Ed Norton), and very few references were made to any of the events in this film, only alluding to specific events. This film's role in the MCU was finally reinforced in 2016, when Hurt reprised his role as General Ross in Captain America: Civil War. In 2019, the logo for the film was openly included in a montage

that listed all the movies preceding Avengers: Endgame, though it didn't use footage from the film — footage from The Avengers and Civil War was used for Banner and Ross insteadnote that said, the Infinity Saga variant of the montage did include footage from the movie. In a later May 2019 AMA, Kevin Feige confirmed the student eating pizza in this film is the same person as the debate coach in

Spider-Man: Homecoming. The film's events were also shown in an alternate universe showcased in What If?, which also made a point to acknowledge the Fury's Big Week comic (which was set during the events of Phase 1's films). Finally, supporting character Samuel Sterns (Tim Blake Nelson) has been announced to appear in the forthcoming Phase 5 film Captain America: New World Order.

As noted above, the Hulk next appears in The Avengers, released in 2012. After a cameo in The Stinger of Iron Man 3 in 2013, his next proper appearance would be in 2015's Avengers: Age of Ultron, followed by 2017's Thor: Ragnarok and Avengers: Infinity War in 2018, and Avengers: Endgame in 2019. It would not be until 2019 that a spin-off, She-Hulk: Attorney at Law, was announced for Disney+; given that Universal only has the movie rights, the platform seems to be how Disney will sidestep those issues in order to better integrate these characters into the setting. The fact that the Abomination will finally return, with Tim Roth reprising the role, further indicates this, following his reintroduction cameo in 2021's Shang-Chi and the Legend of the Ten Rings.

HULK HAS STRONGEST TROPES THERE IS!

open/close all folders
Tropes A to L
Tropes M to Z
"I hear you have an unusual problem."