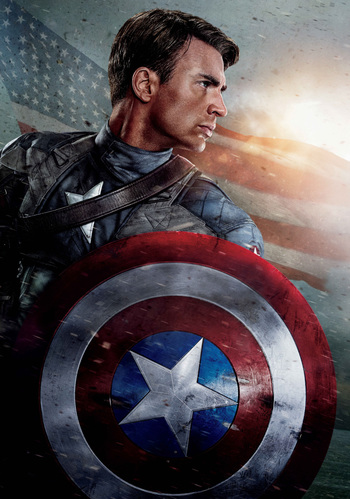 "I don't like bullies. I don't care where they're from."
— Captain Steve Rogers, The First Avenger

Captain America is a sub-franchise of films set within the Marvel Cinematic Universe —based on the character of the same name— starring Chris Evans as Cpt. Steve Rogers.

The main Captain America trilogy is comprised of:

Captain America also appears throughout the Avengers films in a leading capacity:

And then there's a string of cameo appearances in other MCU films:

The future of the Captain America series post-Infinity War is unclear, since it's been reported that Evans' contract expires with that film. Marvel's "Phase Four" slate has yet to be unveiled, so it's entirely possible the franchise will continue with (or without) Evans as Cap.

See also: the 1979 duology starring Reb Brown as Captain American, and the 1990 film with Matt Salinger (yes, that Salinger) in the title role.

Tropes throughout the Captain America films as a whole include: