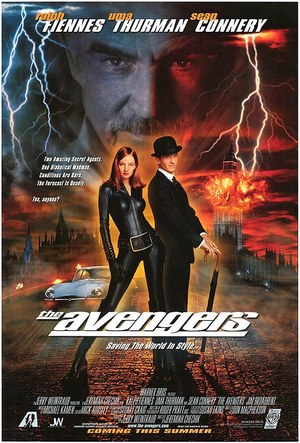 The one where James Bond tries to control the weather.

The Avengers is a 1998 action movie inspired by the 1960s British TV series The Avengers. It stars Ralph Fiennes as John Steed, Uma Thurman as Emma Peel and Sean Connery hamming it up as Sir August de Wynter, an evil Scotsman who can control the weather. Eddie Izzard plays the henchman Bailey.

Do try your best to not confuse this movie with 2012's The Avengers, which was renamed Avengers Assemble on the British market to avoid confusion.

The Avengers contains examples of: