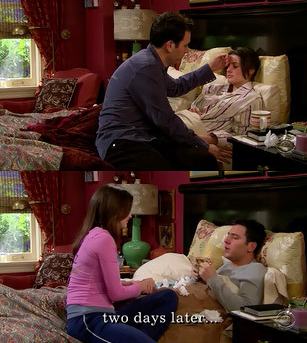 "Give and take" in relationships isn't supposed to go this far.
Someone you love might help take care of you. They might tuck you in or make you soup, and if they get sick one day, you can take care of them in the same special way.
— Daniel Tiger's Neighborhood
Advertisement:

A character gets an illness or an injury and another character spends most of the episode nursing him back to health. By the end of the episode, the "patient" got over his illness, but realizes The Caretaker has caught the illness from him. He decides to take care of the now "patient".

This can be Truth in Television In many families with small children and a stay-at-home parent. It's not rare for the stay-at-home parent to get an infection from the kids before the parent who works outside the house. Also, if a person gets an illness and accidentally spreads it to another member of their household, they might recover before the other person does, leading to this trope.

A typical ending of the Sick Episode (which may overlap with Here We Go Again!). Compare to Now, Let Me Carry You. A subtrope of Hourglass Plot.

Doc's toys take care of her because she has the flu, while noting that usually, *she* is the one who takes care of *them*.

Doc's toys take care of her because she has the flu, while noting that usually, *she* is the one who takes care of *them*.