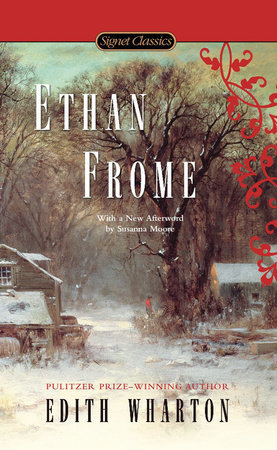 Ethan Frome is a 1911 novel by Edith Wharton. When an unnamed narrator arrives in the fictional town of Starkfield, Massachusetts, he immediately notices a striking lame man named Ethan Frome, who despite only being 50 and looking like a "ruin of a man", will probably live to be 100. The unnamed narrator attempts to ask around the town about Ethan, getting only hints at best from the townsfolk. When circumstance and a huge snowstorm brings them together, he speculates on Ethan's past.

The main story takes place in the form of a flashback, around 20 years ago. Mattie has come to stay with Ethan and his wife Zenobia (or Zeena, as she is mostly referred to) to take care of Zeena in her frail health, as well as do some light housework. Ethan has fallen in love with Mattie, but doesn't make any attempts to tell her how he feels. Until Zeena leaves town to see a new doctor...

The story itself is less than 150 pages long, but it appears frequently on United States High School required book reading lists.