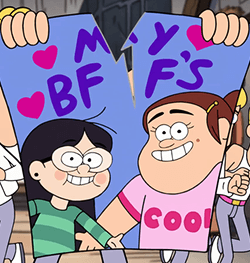 Something has been broken. It may be a spell, a relationship, a life. Whatever it is, it was important, and now it's been destroyed.

And so has something else.

An excellent way for a writer to demonstrate the destruction of something intangible is to break something tangible. The broken object could be anything, but the symbolism is usually obvious. When Bob and Alice break up, a picture of the two of them is destroyed. When Charlie dies, his prized possession is smashed to bits. When the Big Bad is defeated, his stronghold falls apart.

Frequently overlaps with Load-Bearing Boss, Insignia Rip-Off Ritual, Wrecked Weapon, and Stab the Picture. Supertrope to Break-Up Bonfire and Let the Past Burn.

Compare Reality Changing Miniature when one can make the change intentionally with an object that's meant as a representative of a bigger thing, Dying for Symbolism where a living person represents an ideal, and Smash the Symbol where a character intentionally destroys something that symbolizes an ideal for another character.

Contrast It's All Junk where nothing means anything.