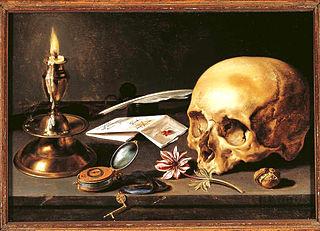 Vanitas by Pieter Claesz
So why would anyone put a candle about to go out, a skull, a withering flower, a watch, a cracked nut, and a letternote reflecting that life is short and art is long on a table together?
"He went back until he was ninety to see a hat? Why didn't he just go back to the store and buy a new one?"
Mother's eyes hardened. "The story isn't about the hat, Jimmy."
"Sure, it is. The hat, the hat, that's all you talked about. Every other word was 'hat.'"
— The Man in the Ceiling by Jules Feiffer
Advertisement:

Essentially, this is when something would normally stretch Willing Suspension of Disbelief, but it is so central to the themes or premise of the story that it is allowed so that it can be used as a symbol.

A Natural Spotlight is often this.

Compare Does This Remind You of Anything?.

Contrast Faux Symbolism (when something only appears symbolic), What Do You Mean, It's Not Didactic?, Everyone Is Jesus in Purgatory (when people see symbolism in everything, including meanings the author never intended). See also Stock Monster Symbolism and compare Magi Babble ('It doesn't have to make sense as long as it sounds mystical').