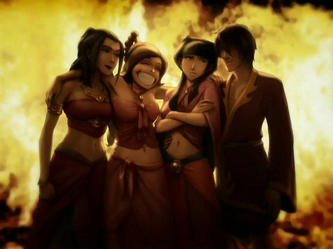 Azula, Ty Lee, Mai, and Zuko bond after wreaking havoc on Chan's house.
Zuko: I'M ANGRY AT MYSELF!
Azula: My own mother...thought I was a monster...

A fairly typical Beach Episode, except for the fact that it's the villains that we get to know better: Zuko, Azula, Mai and Ty Lee retreat to the royal beach house on Ember Island for a well-earned vacation. The four attempt to socialize with other Fire Nation teenagers, with decidedly mixed results, and then end with the traditional heart-to-heart around a beach bonfire. In the secondary plot, Combustion Man attacks the Gaang for the first time.

Defeated for all time

Azula revels in her victory... in a game of volleyball.

Defeated for all time

Azula revels in her victory... in a game of volleyball.