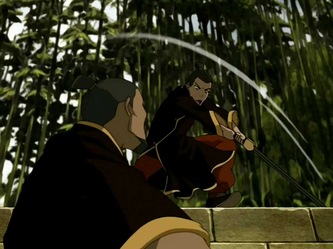 Sokka duels Piandao after revealing that he's from the Water Tribe.
"You told me you didn't know if you were worthy, but I believe that you are more worthy than any man I have ever trained."
Advertisement:

After the members of the Gaang use bending to stop a forest fire caused by a falling meteorite, Sokka feels Overshadowed by Awesome and expresses his frustration at being the weakest member of the group. Deciding that he needs to be cheered up, the group goes on a shopping spree, and Sokka hears of a Master Swordsman that lives nearby, known as Master Piandao. Katara, Aang, and Toph urge Sokka to seek training from him, as much for his sake as for the Gaang's.

With Sokka preoccupied temporarily, the Gaang attempts to do Sokka's old jobs, including his sarcastic jokes. Hilarity Ensues. And Iroh, still locked in his cell, secretly exercises, eventually becoming a One-Man Army.