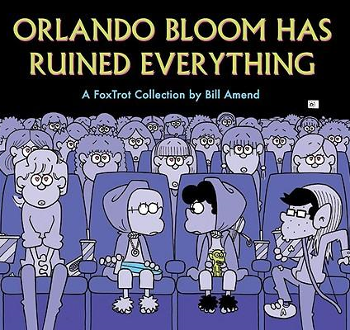 Getting harder to be a nerd these days.
"But we're all here for Sean, let's face it."
— The Nostalgia Chick, on Dragonheart

An enclave of female fans within a traditionally male-dominated fandom. They tend to focus on a particular character or actor, rather than the entire series. Occasionally both sides butt heads over largely superficial reasons, with buckets of opposite-sex awkwardness, which can get defensive. It should also be noted that not all female fans within such a fandom are necessarily of the Estrogen Brigade.

Unfortunately, it is because of this phenomenon that the female fan is sometimes regarded with suspicion — especially if she admits that she does, in fact, happen to find some of the male cast pleasing to the eye. However, finding certain members of the cast to be attractive does not necessarily preclude a fan from liking other aspects of a particular work — and, thus, should not automatically invalidate her as being a "true fan".

An Estrogen Brigade is easily attracted by hints of Ho Yay, since many members of such brigades seem to agree that Guy-on-Guy Is Hot.

Not to be confused with Amazon Brigade. Its Spear Counterpart is the Testosterone Brigade, which, while debatable, may be even more frequent.

These women describe what makes a good guys butt.

These women describe what makes a good guys butt.