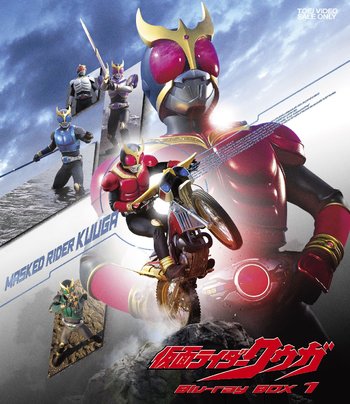 On an Empty Planet, Generation Begins from Zero. Let us Revise the Legend.
A New Hero. A New Legend.
Advertisement:

Kamen Rider Kuuga is the tenth television series in Toei Company's Kamen Rider franchise, the first installment in the franchise's televised run in the Heisei Era after an eleven-year hiatus, and the first to be made at the Turn of the Millennium. It ran on TV Asahi from 2000 to 2001.

When a group of archaeologists uncover the tomb of a legendary warrior, they accidentally unleash a race of monsters called the Gurongi. These creatures immediately embark on a number of killing sprees across Japan, using increasingly ritualistic and specific methods of murder which leave the police dumbfounded as to their motives.

Enter Yusuke Godai, your typical everyday Nice Guy save for the fact that he's mastered 1999 skills. While in town visiting one of his friends at her archaeology lab, he is caught in the middle of a Gurongi attack and sees the Arcle: a mysterious stone artifact recovered from the warrior's tomb. Overwhelmed by his desire to protect everyone, Yusuke instinctively dons the Arcle and has it absorbed into his body. Thereafter, by summoning the Arcle from within himself, Yusuke can use its power to transform into the legendary warrior known only as "Kuuga".

While the power of Kuuga is incredibly weak to begin with, Yusuke learns to use his instincts and desires to unlock additional forms, each with their own strengths and weaknesses. Yet as the battles against the Gurongi intensify, can Yusuke handle the strain of fighting upon his mind and body? Could he lose himself to the Kuuga power and become a mindless killing machine?

Kuuga is notable for being the first Kamen Rider TV series since the end of Kamen Rider BLACK RX in 1989 (following a few stand-alone movies released during the 90s), and a successful modern reboot of a classic Toei franchise.

Partnered with the Super Sentai show Mirai Sentai Timeranger after initially airing alongside the final episodes of Kyukyu Sentai GoGoV in what would later be known as the Super Hero Time block.

In addition to the main series, Televi-kun magazine also released a Bonus Episode called Kamen Rider Kuuga vs. the Strong Monster Go·Jiino·Da. In 2014, series writer Toshiki Inoue teamed up with manga artist Hitotsu Yokoshima to create a manga adaptation of Kuuga, featuring a Setting Update to The New '10s and an art style inspired by the Super Imaginative Chogokin line of action figures.

In 2020, Shout! Factory licensed Kuuga for broadcast on their TokuSHOUTsu channel on Pluto TV and for livestreaming via their website, making it the first Heisei Kamen Rider to be legally available for streaming audiences in the USA.

Voted #4 series in the Heisei era and #4 product overall in NHK’s All Kamen Rider Popularity Vote.

This is what happened when you pushed one of the nicest Kamen Rider with a monstrous actions.

This is what happened when you pushed one of the nicest Kamen Rider with a monstrous actions.