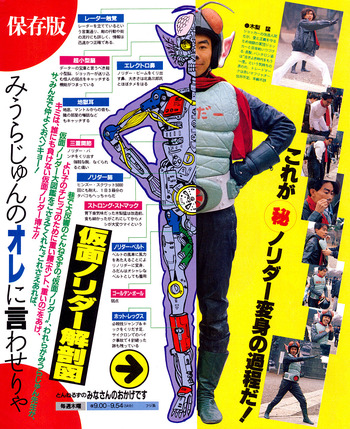 Kamen Norider is a series of skits parodying the original [1] series, starring the Japanese comedy duo Tunnels (Takaaki Ishibashi and Noritake Kinashi). The skits were broadcast on Tunnels's Fuji TV variety show Tunnels no Minasan no Okage desu ("Tunnels's Thanks to Everyone") from March 8, 1988 to May 5, 1990, with special episodes in 1992 and 1993.

While Kamen Norider was not officially sanctioned by Toei, Noritake Kinashi reprised his role as the eponymous protagonist in Kamen Rider Zi-O: Over Quartzer.