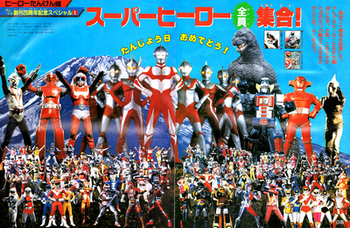 To kaiju, this is what judgement day looks like.note Full image here

Tokusatsu had two major periods, dubbed the "Monster Boom" and the "Henshin Boom". The Monster Boom was started by Godzilla and famously saw the rise of many daikaiju pictures in the film industry. The Henshin Boom - which continued on from around the height of the initial Monster Boom - was started by the Ultra Series and Kamen Rider, and it greatly influenced how action heroes worked and its effects can still be seen today in the superhero and action-adventure genres, with that influence even percolating westward.

Like Jidaigeki or Anime, Toku is one of those terms that means slightly different things in Japan and the West. While Westerners use it to refer almost exclusively to the Japanese superhero shows, in Japan it simply refers to any live-action production which makes extensive use of special effects. This means that, to the Japanese, things like Smallville, Stargate SG-1, Doctor Who, Knight Rider, Red Dwarf, or even James Bond count as Toku. This list also includes shows that use puppetry, like Gerry Anderson's Supermarionation series Thunderbirds and Terrahawks, and even Thomas & Friends. Far and away, the most popular early example of Toku is the Godzilla film franchise, which exemplifies many of the genre's tropes: People in Rubber Suits smashing scale model cities, and an abundance of squibs.