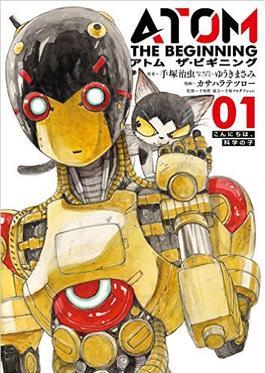 Not too far in the future, but just before a certain robot was made, Japan was nearly decimated in a gigantic catastrophe of unknown origin. However, five years later, the country is well on its way to recovery - thanks to huge leaps in robotics technology. Indeed, robots are now a part of everyday life and the populace has been caught in a literal robo-craze. But despite the advancements, robots are not humanity's partners, nor even servants - by the end, they're just heartless tools.

However, two young postgrad students at the Nerima University advanced robotics department plan to reach yet unheard of achievements in robotics. The result of their research is the "Bewußtsein System" - a new take on the concept of AI, where rather than developing an artificial "intelligence", but rather an artificial "awareness". They believe that this will allow robots to form actual feelings and thoughts on their own accord without further human input. In short, the system would give robots "hearts". To this end, they created the A10 series of robots in order to test the system, with the newest one in the series being the android A106, often simply called "Six". But the two young researchers don't exactly see eye to eye on what they're trying to accomplish with the Bewußtsein System.

The first one wants the system to allow robots to evolve to the point that they'll be able to stand together with humanity. Not as helpers, but as equals. Long story short, he aims to create a "friend".

The second one, on other hand, dreams on creating a robot that would surpass not only anything modern robotics can throw at it, but also humanity itself. Maybe as a take that to all nay-sayers, or just because he believes he can. Either way, his aim is clear and the hand steady - he wants to create a man-made "god".

Those two researchers and best friends are Hiroshi Ochanomizu and Umatarou Tenma. At this point, in their rundown lab near a junkyard, they could've never foreseen what their research would lead to. After all, who would've thought that from such meager beginnings would come the world's greatest champion and protector, one that would become the bridge between humanity and robots - the Mighty Atom, Astro Boy.

Atom: The Beginning is an Science Fiction Manga series, and a prequel to Osamu Tezuka's classic Astro Boy series, written by Makoto Tezuka and illustrated by Tetsuro Kasahara. It began serialization in Shogakukan's Monthly HERO'S magazine on December 1, 2014 but moved to the digital Comiplex service with the rest of HERO'S manga in 2020. It received an Animated Adaptation that premiered as part of the Spring 2017 Anime broadcasting season by Signal.MD (Recovery of an MMO Junkie). It is available for streaming via Amazon's Anime Strike service.

Atom: The Beginning includes the examples of: