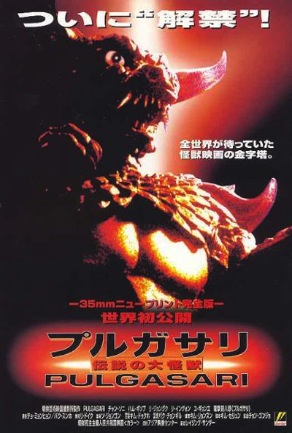 Pulgasari is an odd Kaiju film that came out of North Korea. It was produced and directed by Shin Sang-ok, a South Korean director who was kidnapped and taken into North Korea, and features special effects by the Godzilla effects team at Toho. It's complicated.

In the film, in feudal Korea, the evil King becomes aware that there is a peasant rebellion being planned in the country. He steals all the iron farming tools and cooking pots from the people so that he may make weapons to fend off the peasant army. After he returns the property to the people, an old blacksmith is imprisoned and starved to death. His last creation is a tiny figurine of a monster — Pulgasari, a Godzilla-like creature that eats iron. The blood of his daughter Ami brings the creature to life. Pulgasari fights with the poor, starving peasants to overthrow the corrupt monarchy — but eventually he turns on them.

The movie was released within Korea in 1985, and eventually shown to international audiences in 1998. You can watch the full movie here