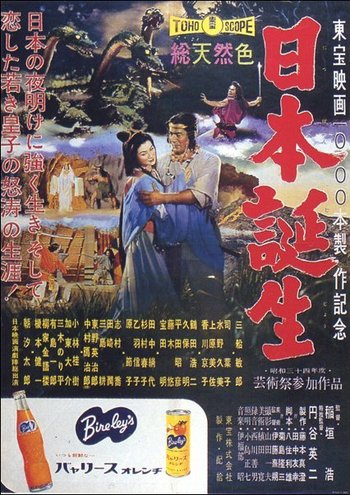 The Three Treasures (日本誕生 Nippon Tanjō, lit. Birth of Japan) is a 1959 film directed by Hiroshi Inagaki. An Epic Movie featuring an All-Star Cast of some of Toho's biggest names, including Toshiro Mifune, Kyoko Kagawa, Takashi Shimura, Setsuko Hara and Akira Takarada, this film tells the story of the legendary Prince Yamato Takeru (Mifune), who, after strangling his brother, and letting everyone believe that he killed him, is sent on various missions and begins to suspect that his father wants him dead.

The film is interwoven with tales from Japanese Mythology, featuring Susanoo (Mifune again), the god of storms.