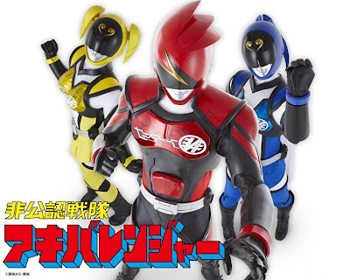 "Good kids, stay away from this show. Got it?"
Akihabara, a town which floats in a sea of delusions. There, we find three warriors who believe "pain is power", and fight extravagant battles inside their own heads. They are:
Advertisement:

Nobuo Akagi is a twenty-nine year old loser. He is a Super Sentai fanatic, lives out delusions of grandeur in his head, and crushes horribly on the female protagonist of an animated television show.

One day he and two others- martial artist Mitsuki Aoyagi and Cosplay Otaku Girl Yumeria Moegi (Stage Name)- are scouted to become the Hikonin Sentai Akibaranger, tasked with defending the Otaku mecca of Akihabara from the "Blatantly Evil Guerilla Marketing Firm B", who wish to re-purpose the land into a generic business district devoid of Otaku culture.

Armed with an encyclopaedic knowledge of Super Sentai tropes and no shortage of misplaced enthusiasm, they fight to become officially recognized as a Super Sentai team, complete with merchandising line and Sunday morning television show.

In April 2013, a second season called Unofficial Sentai Akibaranger Season Twonote A wordplay pun based on "Tsuu", meaning "painful". began airing. Taking place in an Alternate Universe from the original series (and shamelessly Retconning several important events in the process), the Akibaranger have disbanded following their climactic victory over the Blatantly Evil Guerilla Marketing Firm B nine months previously. But all that changes when Nobuo discovers official Akibaranger merchandise for sale in one of his usual Otaku boutiques: have the Akibaranger somehow become an official Super Sentai without them knowing?! Along with Luna Iwashimizu, an energetic wannabe Idol Singer who inherits the role of Akiba Blue, the Akibaranger must re-assemble to solve the mystery and battle a new arch-enemy, the "Neo Dimensional Intellectual Remodeling Underground True Empire of Baros lol".