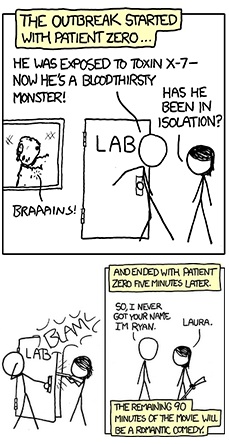 "Let's get dinner after we promptly destroy all the X-7 we've manufactured."

This is when a movie's first scene, usually before the credits, is so different from your preconceptions of the movie that you think you've walked into the wrong theater. Often leads to a Proscenium Reveal or the reveal of a Dream Intro.

Contrast with In Medias Res or Action Prologue (e.g., James Bond and Indiana Jones films) — they still fit the milieu and draw you into the action. Also contrast Bait-and-Switch Credits. If the opening sequence never gets thematically tied to the story proper at all, it becomes a Big-Lipped Alligator Moment. Nested Story Reveal is a supertrope where the fake-out continues for much longer than just one scene.

We hope it's not more proof why you should Never Trust a Trailer.

Overlaps with Art Shift when the scenes are delineated from the "real" movie by footage that simulates some manner of projector mishap, up to and including frames of film melting from the heat of the lamp. Can also overlap with Bait-and-Switch Character Intro if the protagonist is introduced in a misleading fashion.

open/close all folders
Anime & Manga
Comedy
Advertisement:
Comic Books
Fan Works
Films — Animation
Films — Live-Action
Literature
Live-Action TV
Music
Pro Wrestling
Podcasts
In Episode 66 of 372 Pages We'll Never Get Back, Mike Nelson says he has finally had enough of slogging through the grim prose of Shadow Moon and bunks off, revealing he has paid his niece Caitlin $150 to read that week's chapters and fill in for him. She staggers through the opening, drowsy and spluttering as she's still recovering from dental surgery, shows absolutely no interest in the book or the podcast, and can't even stay on topic. By this point, we're 10 minutes into the episode and it's turning into a complete train-wreck, until finally Caitlin walks out, leaving a sheepish Mike to come back and resume the podcast. He takes a break to read that week's section of the book, the theme music plays again and the episode starts afresh.
Puppet Shows
Theatre
Video Games
Web Animation
Webcomics
Web Original
Western Animation
Feedback

The movie opens with the Mane Six from My Little Pony: Friendship is Magic setting off to another adventure in Equestria. However, it is later revealed that the entire scene is just based on a bunch of young earth ponies playing with wooden toys of the Mane Six.

The movie opens with the Mane Six from My Little Pony: Friendship is Magic setting off to another adventure in Equestria. However, it is later revealed that the entire scene is just based on a bunch of young earth ponies playing with wooden toys of the Mane Six.