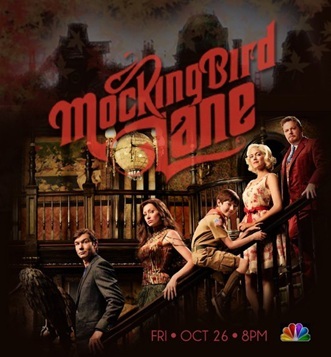 Mockingbird Lane is a 2012 Continuity Reboot/One-Episode Wonder of The Munsters developed by Bryan Fuller, the creator of such shows as Pushing Daisies and Dead Like Me and directed by Bryan Singer. Originally, it was going to be a weekly television series, but NBC decided to air it as a Halloween Special instead.
Advertisement:

In the show, the Munster family move to the iconic house after their son, Eddie, turns into a werewolf during a camping trip with his Boy Scout troop. Meanwhile, Herman is having heart problems and in desperate need for a new heart.