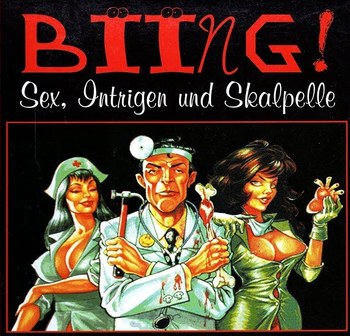 Biing! – Sex, Intrigen und Skalpelle is a 1995 Comedy Video Game with heavy erotica elements by the German developer reLINE Software. It is a tongue-in-cheek Space-Management Game that places you in the shoes of the manager of the sleazy hospital Brainworm Memorial. Sounds rather like a certain Theme Hospital? Well, it is quite different actually. If anything, the game is best summarized as Theme Hospital's Hotter and Sexier, and a great deal more demented, older cousin.
Advertisement:

While also quite silly in nature, the game stands out by also adding a heavy dose of satirical material and Black Humor, as well as a side-filling of softcore erotica to the mix. This is perhaps best emphasized in the employee managing part of the game, where nobody is employed based on skill, experience, or education, but nurses are hired based on bust sizes, doctors based on their golf-handicap, and storage workers based on liver functions tests.

After having been considered a semi-lost game for years, a digital re-release of the game (with the sequel included as a free bonus) finally happened in February 2020 on GOG.com.