Even the Subtitler Is Stumped 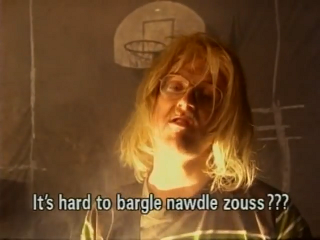 ...with all these marbles in my mouth.

"A PERSONAL NOTE FROM THE CAPTION WRITER: If you have any idea what the Swedish Chef is saying, then you are waaaaay ahead of me."
— Muppet Viral Videos, "Pöpcørn

A common gag about The Unintelligible or people Speaking Simlish (or foreign languages presented as such) is that eventually even the guy writing the subtitles/closed captions gives up and types "???" or something similar.

In Real Life, closed captions of live television do occasionally result in typos or glitched text, but if the typist can't catch up they tend to just stop and pick up at the next sentence. More rarely, if the subtitler really doesn't understand, or it's obvious that character isn't meant to be understood, they'll type something along the lines of [UNINTELLIGIBLE], [CROSSTALK] or [PH] (for 'phonetic'). A Gag Sub or Fan Sub, though, tends to be a bit less formal about this kind of thing.

A Sub-Trope of Fun with Subtitles.

Before you start entry pimping, please make sure that your examples actually qualify for this trope. Cases of accidentally misheard/mistyped words don't count — it has to be done on purpose.

Austin Powers and his dad decide to have a conversation in English English. Initially, the subtitles can translate the conversation before it gives up and just writes what they're literally saying.

Austin Powers and his dad decide to have a conversation in English English. Initially, the subtitles can translate the conversation before it gives up and just writes what they're literally saying.