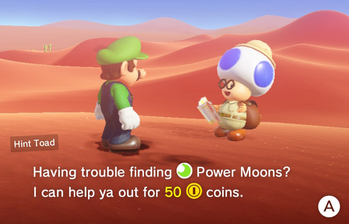 Balancing the difficulty of puzzles in a videogame can be tricky. While other aspects of the game difficulty can be balanced by adjusting settings such as health and damage points, time limits, number of opponents and so on, with puzzles it's often a case that either you "get it" or you don't. Developers want to make sure that their games aren't too easy to be fun but they don't want players getting stuck on a puzzle and ending up having to choose between Unwinnable or Guide Dang It!.

So in order to include puzzles hard enough for the Hard Core while still giving all players a good chance of beating the game without resorting to a guide, the developer can include a Hint System. It can either give players a small nudge in the right direction or smack them upside the head with the board of knowledge and show them the full solution. Many systems will give progressively more helpful hints until the player catches on, so as to give as little help as they can and therefore preserve as much of the satisfaction of beating the puzzle as possible.

It should be noted that Fan Dumb in general loathes these- even though their purpose would seem to be to help casual players get through less-than-casual games, they will be attacked as automatically making a game far too easy. The fact that it's optional will not deter them.

There are a number of different forms a hint system can take:

The hints themselves might appear as text on the screen, your Exposition Fairy making a suggestion or some sort of visual clue such as a glow around the object you need next. Player Nudge is an one-time version of this.

Literature
Tabletop Games
Pinball
Tables with voice overs will generally have an announcer of some kind that lets you know what is going on and sometimes even which targets to hit. Since players generally don't get to read the manual, if the manual even explains the rules at all, this is helpful for anyone who haven't figured out every single rule yet.

Tables often have a display that will show status (and cover for any malfunctioning hardware). And when all else fails, look for a blinking light on the table. 99 % of the time, that's a good spot to shoot.