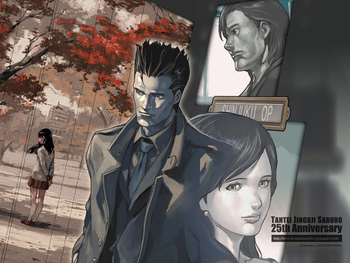 Originally debuting in 1987 on the Famicom, various iterations of the series have sold over 2,220,000 copies in total, making it one of the longest standing and best-selling Japanese Adventure Game series.

The series had little to no American presence until 2008, when a Nintendo DS remake of the first three installments featuring the character was translated in America as Jake Hunter: Detective Chronicles. To put it kindly, it was a "Blind Idiot" Translation and it came off as a Darker and Edgier rip-off of the Ace Attorney series and a poor one at that, making the chances of it ever catching on in the US slim. One year later, the three cases were re-released as Jake Hunter Detective Story: Memories of the Past with much better Woolseyism-type translations, three additional cases, six Super-Deformed mini-sodes, and a ton of unlockable extras. If you would be at all interested in the games, the 2009 release is the one to get. You'll thank us later.

The franchise consist of the following games:

Daedalus: The Awakening of Golden Jazz is a prequel to At the End of the Dream. Saburo, prior to being a police officer and detective, arrives in New York City to collect the belongings of his grandfather Kyosuke, who was murdered. He is helped by Yoko, who is a Japanese international student studying in the city and by his old female friend, Abby.

Overall, the games are quite linear and definitely more read than played, but those who enjoy mystery games should find them intriguing.