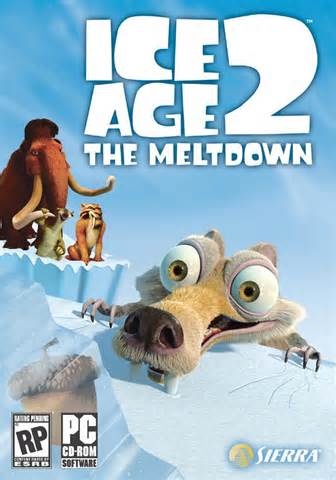 Like other big-budget films, the Ice Age franchise has spawned videogame spinoffs.
Advertisement:

The original 2002 Ice Age only had a cheaply made Game Boy Advance game which was negatively received by players and critics alike. It was created by Ubisoft. Following the success of the first film, Ice Age: The Meltdown received an Action Platformer game released on all major platforms at the time in 2006 (except the PlayStation Portable). The console versions of the game were platformers where the player controls Scrat, with the ocasional mini-game featuring the main characters, whereas the Nintendo DS and GBA games are puzzle games where the player uses the three main characters to overcome obstacles.

They focused on the franchise mascot Scrat, the prehistoric rat-squirrel hybrid on his quest to find more and more nuts at the same time, unfurling alongside the main plot of the films. There are also various mini-games, sometimes by Scrat, sometimes from the perspective of Manny, Sid or Diego. These games have received generally mediocre reviews, although the Wii and iOS versions of Dawn of the Dinosaurs currently hold scores 75

The 2012 mobile games Ice Age Village and Ice Age Adventures were generally well received by the public. However, this wasn't to last with Ice Age: Continental Drift - Arctic Games , a mini-game party game with Kinect functionalities that gathered mostly negative reviews on par with its Game Boy Advance precursor.

Ice Age: Collision Course didn't receive a game of its own, given that movie tie-in games fell out of flavor by the mid-2010s (Ratchet & Clank (2016) being a major exception but that's because it's a remake of the original) However, in late 2019 a game called Ice Age: Scrat's Nutty Adventure was released for the PlayStation 4, Xbox One, and PC. It's a platformer reminiscent of the second game where players take control of Scrat through scenarios from all five movies.

Tropes featured in Ice Age: Dawn of the Dinosaurs: