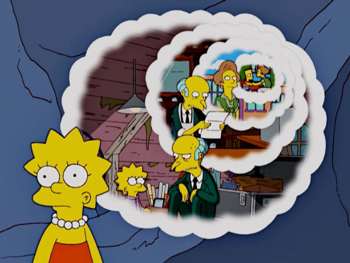 Well, Lisa's best recollection of Burns' paraphrasing of what he read in Moe's letter is that Krabappel told Moe...
"We're in the middle of a scene you don't remember in a narrated flashback framed by a flash-forward in a prequel book. There's no way in hell you're finding your way back here."
— The Oracle, The Order of the Stick: Start of Darkness
Advertisement:

This trope is related to the Dream Within a Dream or Show Within a Show, but it differs in that the "inner" stories claim all of the reader's attention, and there are often many levels of them, so it becomes hard to remember which one is the "outermost".

Most Nested Story plots try to end in the original storyline, the major exceptions being All Just a Dream and Nested Story Reveal plots, which usually leap to the outer storyline only at the end of the piece. There are, however, a few stories that never return to the outer plot, perhaps, but not always due to carelessness on the part of the author: Compare "Shaggy Dog" Story.

For the more general application of this trope where there's only one nested story and it's usually not as fascinating as the main story, see Story Within a Story.

A type of Recursive Reality. The "outer" story may be a Framing Device. See also Perspective Flip and The Rashomon. Compare Soap Wheel. See also Two Lines, No Waiting and Four Lines, All Waiting. Can become a Kudzu Plot if many stories within stories are unresolved. See also Flashback Within a Flashback.