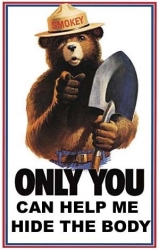 Détournement ("rerouting" or "hijacking" in French) is a form of Parody in which existing material—especially advertising, Public Service Announcements, Very Special Episodes and Aesops of the more Anvilicious or paranoid sort—is co-opted or repurposed for a message different from (or better yet, completely opposite to) the one it was originally intended to give.

The Trope Namer is the Situationist International

movement, a French Marxist movement focused on the effects of mass alienation through cultural control. They asserted that people within a mass culture were manipulated by a constant mass-media / government / "religion of spectacle" proposed by Guy Debord in "Society of the Spectacle."

Detournement was one way of bringing modern art into politics, since they rejected any 20th century art that removed itself from the politics of its time.

Not to be confused with Dénouement. See also Gag Dub and Gag Sub.