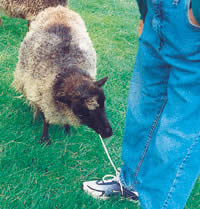 Pictured: the Dénouement in her element, unraveling plot threads.
Advertisement:

Dénouement (pronounced day-noo-mahn) is French for "unknotting", and denotes the point in the story when mysteries are unraveled, fates are determined and explanations made. It is not synonymous with climax: This is the aftermath of the action, not the peak. It is usually the scene after the climax — although it can happen in such close proximity to the events of the climax that it may appear to be part of it. An equivalent English expression would be "tying up loose ends".

It is fairly ubiquitous, though not all stories have dénouements. How final and extensive it is depends on the scale of the plot — and whether there may be a sequel. For a Happy Ending or even Bittersweet Ending, this is generally where the happiness is shown. As a consequence, many usual rules -- directed at keeping conflict and suspense going — are suspended here. The Law of Inverse Fertility, for instance, does not apply; if The Hero and the Love Interest married at the climax, a dénouement may show them happily anticipating the birth of, or cooing over, their first child.

In the Downer Ending, or even the Bittersweet Ending, the tragedy may taper off. The Hero died at the climax; the Dénouement shows his Meaningful Funeral, or his friends raising a glass To Absent Friends. The Star-Crossed Lovers had to part; the Dénouement shows them going on with their lives, however sadly.

In television writing, this is usually The Tag, sometimes a Dénouement Episode. A Sequel Hook may feature. In music, this is Album Closure. If the Dénouement is very long, it's Ending Fatigue. If it's missing, there's No Ending.

Has practically nothing to do with Détournement.