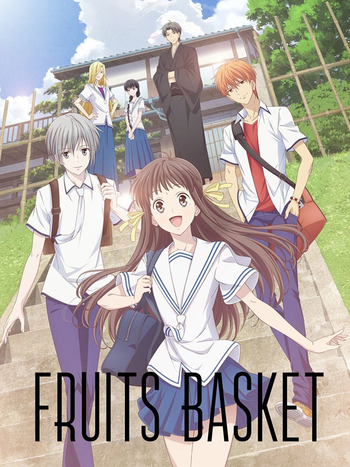 Clockwise, from top left: Arisa Uotani, Saki Hanajima, Shigure Sohma, Kyo Sohma, Tohru Honda, and Yuki Sohma
"I wish I could’ve lived my life without making any wrong turns. But that’s impossible. A path like that doesn’t exist. We fail. We trip. We get lost. We make mistakes. And little by little, one step at a time, we push forward. It’s all we can do. On our own two feet."
— Yuki Sohma
Advertisement:

Fruits Basket is a shoujo manga series written and illustrated by Natsuki Takaya. It first ran in Hakusensha's Hana to Yume magazine from July 1998 to November 2006.

After the death of her mother, young Tohru Honda has been secretly living on her own in a tent. Her life changes forever when she stumbles upon the secret of the estate she is living on illegally: the land is owned by the Sohma family, who are afflicted by a Hereditary Curse that changes thirteen members of the family into animals of the Eastern Zodiac (plus the Cat, an animal who would have been part of the Zodiac but was left out) when they are hugged by someone of the opposite sex that is not also a Zodiac member. Oh, and the family is a hotbed of horribly abusive parents and children with enough emotional issues to make a shrink very wealthy.

Upon being discovered and taken in by the Sohmas, sweet-natured Tohru becomes embroiled in the dysfunctional family's various crises, bringing the outside world to the closed-off family while also having to confront some issues of her own.

One of the best-selling shoujo manga series in both Japan and America, Fruits Basket is often the second best-selling manga series in the US period, beat only by a certain ninja. Originally translated to completion by Tokyopop, the story was re-translated and re-released in omnibus format by Yen Press in North America.

The series was first adapted as an anime TV series in 2001, which ran from July 5 to December 27 on TV Tokyo. It was produced by Studio DEEN and directed by Akitaroh Daichi.

In July 2015, Takaya announced that Fruits Basket would be receiving a sequel

in the form of a side story titled Fruits Basket another. Taking place after the main trio graduate, the story focuses on a young girl named Sawa Mitoma instead as she goes through her first days in high school. The side story premiered online starting in September 2015, and ended with three volumes in 2018. This sequel has a few one-shots written after the conclusion of the main manga, however.

Another post-series spinoff, Fruits Basket: The Three Musketeers Arc, concerns the titular trio of Shigure, Hatori, and Ayame discussing the aftermath of the main story. This lasted for three chapters, but was announced to have a follow-up installment.

In November 2018, it was announced that Fruits Basket would have a second animated adaptation produced by TMS Entertainment and directed by Yoshihide Ibata, that follows the original manga's story more closely. It premiered on TV Tokyo (which also aired the first anime) in April 2019; the second season premiered in April 2020 and the third and final season premiered in April 2021, nearly twenty years after the 2001 anime's premiere. The 2019 anime is also licensed by Funimation and features Role Reprises from several core members of its English voice cast.

The series received a compilation film titled Fruits Basket: Prelude, which premiered on February 18, 2022. It recaps the 2019 anime series, and includes a prequel episode titled Kyо̄ko to Katsuya no Monogatari that focuses the backstories of Tohru's parents and how they got together, which the 2019 anime didn't adapt, and an original story written by Takaya set after the series.

Also see this page for tropes that can be applied directly to the characters.

open/close all folders
A-G
H-M
N-R
S-Z
another
Tropes relating to Fruits Basket another are: