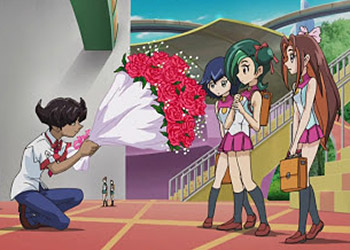 Each rose represents a molecule of my heart that is yours.
Kirk: Shall we pick some flowers, Doctor? When a man visits an old girlfriend she usually expects something like that.
McCoy: Is that how you get girls to like you, by bribing them?
— Star Trek: The Original Series, "The Man Trap"
Advertisement:

For centuries, flowers have been one of the main components of romance, relationships, and sometimes even sex.

Flowers are used, primarily, within these four contexts:

For bonus points, if there is a heavy presence of Flower Motifs, write down its symbolic/intentional significance, if possible.

They're sometimes seen as either part of or on its own as a Grand Romantic Gesture. It is also often paired with Chocolate of Romance.

Both are quite popular in both Western and Eastern Media. While the former tends to focus more on red roses, the latter tends to put more focus on other kinds of flowers. In Anime and Manga-related stuff, expect to see Cherry Blossoms and lilies at some point.

Among the most common flowers present in these scenarios, we have roses. Therefore, compare Something About a Rose. Also, do notice that this trope differs from Something About a Rose due to the fact that the latter has plenty (the majority, in fact) of non-romantic examples, as well as examples solely related to individual characters. Also, this trope can (and should) include more examples than roses, if possible.

Sometimes the recipient may react badly to being given such a gift, saying that Picked Flowers Are Dead.

Often overlaps with Chocolate of Romance or Garden of Love. Compare/contrast The Tragic Rose and Love Bubbles (aka Love Flowers). See also Queer Flowers for when LGBT characters hint at their romantic feelings through this trope. See also Distracted by the Luxury. Compare and contrast Alluring Flowers, which are often thematically or directly linked to sexual desire.

Lamput morphs into a flower while he is held by Slim Doc, who is standing right next to a pretty woman. The woman thinks Slim Doc is offering the flower out of an affection for her and accepts the gift.

Lamput morphs into a flower while he is held by Slim Doc, who is standing right next to a pretty woman. The woman thinks Slim Doc is offering the flower out of an affection for her and accepts the gift.