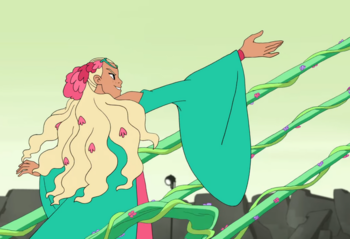 Thor: It's not my fault! She never told me she was a fertility goddess!
Loki: She has flowers in her hair and bluebirds singing around her head. Who did you think she was, the bringer of pestilence?
— The Order of the Stick
Advertisement:

A character adorned with flowers or has flowers as a visual motif to show their Nature Lover nature or Green Thumb abilities. Often goes along with a pure heart, simple wisdom, and humility, or other "natural" virtues. This simple, natural decoration often embellishes otherwise humble garments, and may be used to contrast with the Conspicuous Consumption bling of an antagonistic Rich Bitch or Evil Aristocrat. As such, it's a form of Good Guys Garb.

Usually female, due to Flowers of Femininity, but may be found on male bohemians and Arcadia residents as well. Due to the Hippie movement's Return to Nature principles, New Age Retro Hippies and Granola Girls can be spotted by their flower crowns or necklaces. A common feature of Earth Mother and Mother Nature as well.

Often paired with Fertile Feet. The accessories may also be green to highlight the association with nature.

Sister trope to Garden Garment and Plant Person. Related to Nature Equals Plants. If worn in the hair, may be a form of Signature Headgear. Compare Innocent Flower Girl.