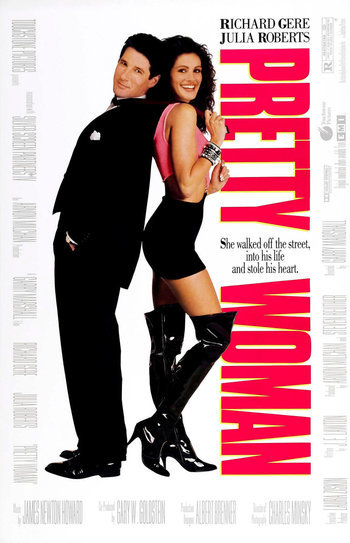 When business becomes pleasure...
Elizabeth: She's wonderful, Edward. Where ever did you find her?
Edward: 976-BABE.
Advertisement:

A 1990 Romantic Comedy starring Richard Gere and Julia Roberts, directed by Garry Marshall, and named for the song by Roy Orbison.

Gere plays Edward Lewis, a wealthy businessman who hires Vivian Ward (Roberts), a Hooker with a Heart of Gold, to serve as his escort while he stays in Los Angeles. They end up falling for each other.

This movie was a genuine blockbuster when it came out, and it made then-23-year-old Julia Roberts a star; she received an Academy Award nomination for Best Actress as well. Richard Gere didn't do too badly out of it either.

Pretty Woman was initially intended to be a dark drama about prostitution in Los Angeles, but was reconceptualized into a romantic comedy. Today it is one of the most financially successful romantic comedies ever, making $178m in the States and another $285m worldwide for a total of $463m note roughly $855m adjusted for today, on a $14m budget with a R-rating and its subject matter to boot. The film was followed by a string of similar romantic comedies, including Runaway Bride, which teamed up Gere and Roberts under the direction of Garry Marshall once again.