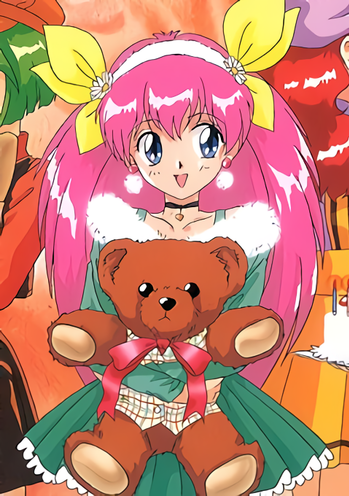 Cute, cuddly, and looks great with her holiday dress.
Advertisement:

If you want to give a female character an air of youthful femininity, give her some stuffed animals that she keeps in her room or carries around. Dolls simply won't do, it has to be stuffed animals. Anything from Teddy Bears to Plushies will help make it clear that even if this character is a woman, she's young at heart.

Although that also means immature in a lot of cases. In fiction, it's often the most girliest or bratty woman who still has them. In Real Life Japan, some women carry them around to try to remain Kawaiiko for fear of becoming a Christmas Cake.

Often the animals are carried around constantly, even to the point of being a Security Blanket. Other times the stuffed toy will get dropped in an Empathy Doll Shot. A girl who's still young enough to be in the Princess Phase will have a court full of them.

Note that this trope is Always Female. Guys having stuffed animals past a certain age would fall under other tropes, such as Real Men Wear Pink and Everything's Better with Plushies.

Women wanting to act mature, of course, will not have any, unless she's Not So Above It All and has some hidden away.

The main character of any Magical Girl show is quite likely to have some in her room more than the other characters. If she has a Mentor Mascot, that character will often be disguised as one.

Not an infrequent feature of works relying on Mars-and-Venus Gender Contrast.

A Creepy Child will, of course, have a creepy animal or a dangerous one.