Fanfic / As Fate Would Have It 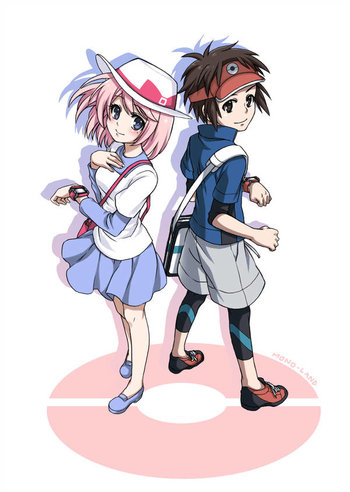 Used with permission from the original artist. Original art by MONO-land

As Fate Would Have It is a completed Pokémon fanfic by Rmpdc that focuses on Nate and his Love Interest Yancy, as they balance their careers alongside their growing infatuation for one another. It can be found on FanFiction.Net here

, as well as on Archive of Our Own here

Nimbasa City. Our protagonist, Nate, has just earned his 4th Gym Badge. Just outside the gym, he encounters his Childhood Friend Rosa, and invites her on a Ferris Wheel ride. Just as he tries confessing his long-suppressed feelings for her, she reluctantly turns him down, and Nate finds out the hard way that his best friend, Hugh, has apparently beaten him to the punch and has started going out with her. Following this, he begins aimlessly wandering around the amusement park. By chance, he comes across a downed custom Xtransceiver. As soon as he picks the device up and begins leaving for Driftveil City, the device rings, and he picks up. Sure enough, he comes into contact with the device's owner, Yancy, who promptly asks him to hold onto it for the time being. From there, friendship, eventual romance, and awkward moments ensue.

As Fate Would Have It includes the following tropes: