Video Game / Arc the Lad: Twilight of the Spirits 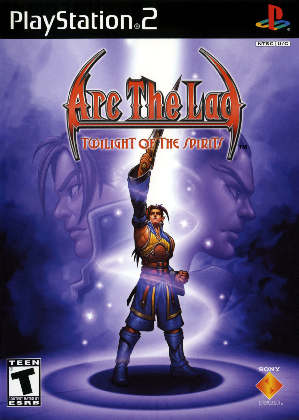 Choose Your Side...
Advertisement:

Arc the Lad: Twilight of the Spirits is the fourth game in the Arc the Lad series. The first game in the series for the PS2, Twilight of the Spirits tells the story of two characters; the first is Kharg, a young man who happens to be descended from noble blood, training with his mentor, Lloyd. Everything is fine and happy, and we meet up with two other characters (his friend Paulette and a forest-dwelling child named Maru) before monsters called Deimos attack one of the nearby mines for their main source of power, Spirit Stones. After Lloyd's death, Kharg vows to stop the Deimos, and later teams up with an ex-solider named Ganz and a scientist named Tatjana.

On the other hand, the story switches over to a half-human half-Deimos young man named Darc, who is enslaved by a froggy hag named Geedo. Needless to say, he doesn't get treated very well. After meeting up with an Orcon named Delma and her brother Densimo, he claims that his ambition is to become Savior of the Deimos, until his betrayal at the hands of Densimo and Geedo, allied with Drakyr. After which, his new ambition is to be King of the Deimos, and to destroy humankind, along side Delma, and his new allies; the Lupine Volk, the Pianta Sage Camellia, and the Puppet Master Bebedora.

Each hero is also asked by one of the last remaining Sprits in the world to Save the World, and thus begin on an epic quest to do so, crossing paths multiple times and discovering some interesting secrets about themselves.

The game is a tactical RPG with a plot twisting through about every trope in the book.

Arc the Lad: Twilight of the Spirits was one of the first titles to utilize PlayStation 2 emulation technology on the PlayStation 4.

Tropes used in this game include: