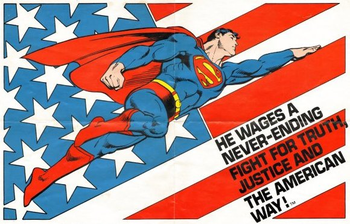 A stock reason given in the opening/narration of a show. This is why the good guys in some shows (particularly Anime, Kaiju, and Toku) fight against evil. It's for justice, righteousness, principles, and values that depend more on what people deserve than on what they enjoy. It's a good reason to launch all your fighters or Humongous Mecha and beat the stuffings out of rubber suit monsters.

This seems like Concepts Are Cheap, but these shows can have fully developed plots. This is just mainly applied to the trailers, narration, and theme songs. Then again, much of the audience is here to watch giant monsters and robots fight, so why worry about deep motives?

This trope has become somewhat anachronistic since the 1990s, with the Teenage Mutant Ninja Turtles arguably being one of the last pure examples of it. Most heroes nowadays tend to have more complex motivations than simple, unblemished goodness or altruism, and some aren't necessarily more morally desirable than the villains they fight.

Compare For Science!, Captain Geographic, Captain Patriotic, Captain Space, Defender of Earth!, and For Happiness. May be part of a Heroism Motive Speech.

The Evil Counterpart is For the Evulz, or Well-Intentioned Extremist if the villains had good intentions behind their atrocities. Do not confuse with Justice Will Prevail, a more complicated topic to say the least.

This is Older Than Print, with early examples going all the way back to Ðe Faðer of Engelish Lytterature hymselfe, Geoffrey Chaucer.

Alternative Title(s): The Deontologist, For Justice