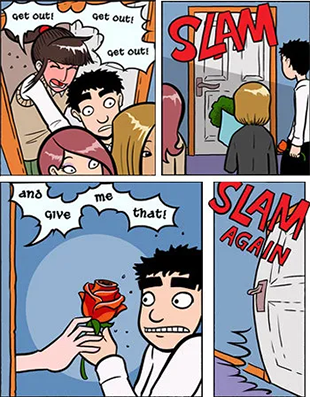 The meeting ended with Trotsky being ordered to make a public statement admitting and apologizing for crimes against the workers' state. Trotsky jumped from his seat and tried to slam the door of the throne room at the Kremlin. The hall door is massive, Trotsky pulled it with all his strength, but it was dead slow to open. In his fury, he did not notice and made repeated attempts to bang it shut. Thus instead of witnessing a dramatic gesture indicating a historic breach, we watched a sorry figure struggling with a door.
— Boris Bajanov, personal secretary to Josef Stalin and witness to Leon Trotsky's expulsion from the Soviet Central Committee.
Advertisement:

Bob and Alice are arguing, screaming at each other at the top of their lungs. Finally, Bob says something that really ticks Alice off. "I'm outta here!" She yells. She leaves, slamming the door shut behind her. Two seconds later she returns...because she forgot her coat. She leaves again, slamming the door behind her again. She returns again... She forgot her keys...

Generally a comedy trope, Failed Dramatic Exit is when a character's dramatic exit is foiled by them returning for whatever reason. Subtrope of Failed Attempt at Drama. Supertrope of House Amnesia, as when the character leaves dramatically but returns when they realize that they're at their own house. Compare also to The Exit Is That Way in which a character storms off but is then told that they are going in the wrong direction.

The Solomons never overstay their welcome

The Solomons never overstay their welcome