Film / The Ghost and Mr. Chicken 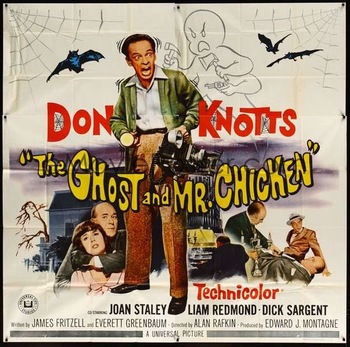 The horribleness and awfulness of it will never actually be forgotten?
— Ollie Weaver, quoting Luther's newspaper story.
Advertisement:

The Ghost and Mr. Chicken is a 1966 comedy horror film directed by Alan Rafkin and starring Don Knotts, with Joan Staley, Liam Redmond, and Dick Sargent. The screenplay was written by Jim Fritzell and Everett Greenbaum, who'd been writers for The Andy Griffith Show when Knotts costarred on that series as Barney Fife.

In the small Kansas town of Rachel, one Luther Heggs (Knotts), a timid typesetter for the local newspaper who aspires to be a photojournalist, gets the opportunity by agreeing to spend the night in an allegedly haunted house, the site of an unsolved murder-suicide nearly twenty years before. After Luther claims the house is indeed haunted, the nephew of the deceased aims to continue his intended destruction of the house, but for what? Luther must solve the mystery or be branded a fraud.