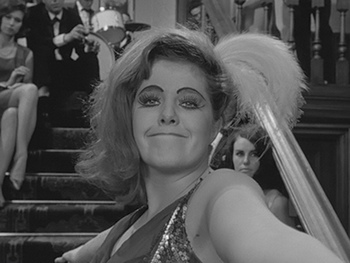 Georgy Girl is a 1966 British romantic dramedy film directed by Silvio Narizzano and starring Lynn Redgrave in the title role.

Georgiana "Georgy" Parkin (Redgrave) is a vivacious and outgoing Ugly Duckling who lives with her beautiful yet bitchy violinist friend, Meredith (Charlotte Rampling), and often holds the children's dance and music classes she teaches at the loft of her parents' wealthy employer, James Leamington (James Mason), who served as a father figure to Georgy as she was growing up but now lusts after her while being in a loveless and childless marriage with an ailing wife. Leamington makes a proposition to Georgy — a legal contract in which she'll be his mistress and he'll provide her with all the money and luxuries she wants — which she isn't too sure of accepting. Then Meredith finds herself pregnant with her boyfriend Jos's (Alan Bates) baby and Georgy takes full advantage of the contract and throws herself into Motherhood, while Jos falls for her.

Based on a novel by Margaret Forster. This film was nominated at the Academy Awards for Best Actress (Redgrave), Best Actor in a Supporting Role (Mason), Best Cinematography (Black and White), and Best Music.