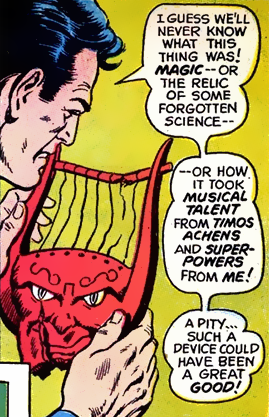 So stop harping on it, Superman.
"Everything Merlin did, my Lady, had another explanation."
— Derfel Cadarn, adopted son of Merlin, The Warlord Chronicles
Advertisement:

Sometimes you track down the monster and pull the rubber mask off to reveal the janitor.

Sometimes you try that, and the monster gobbles you up.

And sometimes you don't get either way. You are left with nothing except the tracks, the sightings, and hypotheses. Two characters can argue for the alternative explanations, supernatural or naturalistic, without either one of them carrying the Idiot Ball.

How this is done affects any reaction to it. Sometimes it invokes The Chris Carter Effect or Kudzu Plot. Sometimes it is an eminently satisfactory way to create an open ending (generally when the question has not been the focus of the plot).

A common effect is to offer a mundane explanation of how something could have happened, but not in fact establish that is how it did happen. (Such as never trying to eliminate the purported cause and establish that the effect does end.)

The verifiable presence of magic in the world does not preclude this trope; in Fantasy works, this may come into play for divine intervention, or rare forms of magic (vs ordinary forms as well as mundane). Or some magical things may be clearly magical, and others more ambiguous. Conversely, the presence of high technology or other non-magical special powers extends the possibilities of this trope by allowing a greater range of "mundane" phenomena. It can also effectively come into play when characters ponder whether an effect was natural or extremely high tech.

Usually the author won't confirm or deny a solution. If they do, see Doing In the Wizard (or Scientist), Jossed, Magic A Is Magic A, all of which tend to exclude this trope.

Often comes into play with Angel Unaware, and does when characters say Because Destiny Says So about situations that could be interpreted as Contrived Coincidence. Any apparent Dead Person Conversation (particularly if Talking in Your Dreams) may fall under this, if the conversation contains nothing that the character could not have known. Prophecies Are Always Right does not preclude their looking like dumb luck. In non-fantastical settings, Twins Are Special is often powered by this trope.

Sub-Trope of Riddle for the Ages. Super-Trope of Santa Ambiguity. Or Was It a Dream? is related, but isn't a subtrope, since not every Or Was it a Dream? scenario involves magical things happening within the "dream".

(from The Other Wiki), a genre of fiction typified by supernatural phenomena that is not explained to the reader or the main characters, hinting at a magical occurrence.. Also compare Through the Eyes of Madness, where the audience sees evidence in favor of the weird explanation, but remains unsure of whether it's real or not because of the possible unreliability of the narrator.

Contrast Real After All, which often involves a mix of mundane and magical explanations, but usually makes it clear at the end which incidents were which (at least to the audience, Gave Up Too Soon is common for the characters).

This may also happen in adaptations. The original character may have a certain ability to do a supernatural thing, but the adaptation never openly states that he has such a power. And yet, at some point something happens, that may suggest it, but with no clear explanation. Those familiar with the source work may be free to consider it a Mythology Gag to the original work, and others may suspect a mundane explanation for it.

See also Domino Revelation, In Mysterious Ways, and Magic Realism. If it's subverted by revealing that some dangerous magic was actually mundane, see Shock-and-Switch Ending.

When Felix throws the ancient Book of Ultimate Power at Master Cylinder, it somehow causes all the Duke of Zill's cylinders and cubes to short out, with the Master Cylinder falling on top of the Duke, with the villain's last words declaring he'll be back. While Poindexter thinks there's a scientific answer to the miracle, Felix believes there's more to it.

When Felix throws the ancient Book of Ultimate Power at Master Cylinder, it somehow causes all the Duke of Zill's cylinders and cubes to short out, with the Master Cylinder falling on top of the Duke, with the villain's last words declaring he'll be back. While Poindexter thinks there's a scientific answer to the miracle, Felix believes there's more to it.