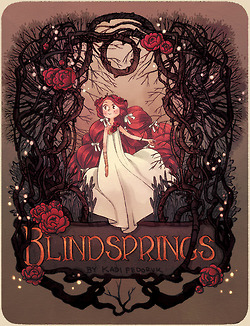 That's it. That's the story.
"Once upon a time, there was a girl. She was young and kind and innocent, and lived with the faeries in the great forest. She was alone. But she didn't mind. She had her duties to attend to.

"One day, she met a boy."
Advertisement:

is a fantasy webcomic by Kadi Fedoruk, involving magic, spirits and a forest otherworld.

We start with a young girl named Tamaura, happy — but alone — in a forest. She doesn't mind being alone: she has her duties caring for the forest and performing services for the spirits who inhabit the forest, and to whom she is contracted.

She meets a young boy, Harris, and they have fun playing together. In time, however, he reveals that he must leave — he is going away to study magic. Years later he returns and frees her from the spirits... against her will and at terrible cost to herself.

Thus, Tamaura is drawn into his city and the conflict between two factions: the Orphics, the spirit-allied former rulers of the city who are now an oppressed minority; and the Academists, "scientific" wizards who have instituted a dystopian police state in their zeal to wipe them out.