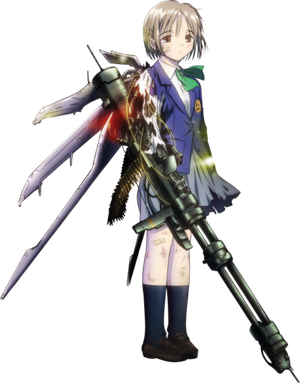 They turned her into the ultimate WMD. They came to regret it.
"What happens when the soldier becomes the weapon?"
— Call of Duty: Black Ops III
Advertisement:

A Human Weapon is someone who has been converted by military forces into a weapon for the purpose of warfare. The methods can range anywhere from Genetic Engineering to exposure to nuclear or atomic energy, but the key result is that this person is now capable of mass destruction.

Most of the time the people who made the Human into a Human Weapon will not give them much sympathy, treating "it" as an object rather than a person. This is often due to shame of having to turn their own against their enemies, Fantastic Racism, or because they now see it as nothing more than a weapon, a tool for murder. Or just typical Mad Scientist ethics. Expect All of the Other Reindeer or Bullying a Dragon to happen. These types of people are easy to make into Woobies as a result.

Sub-Trope of Living Weapon. Compare Tyke Bomb where the Human Weapon is designed and bred from the start to be this and Person of Mass Destruction where someone has the power to destroy the world without direct military help. Also see I Am Not a Gun for when they decide themselves to not be used as a weapon. Compare/Contrast Super Soldier where the Human Weapon is treated as a human being (though there is some overlap if said Soldier works for an unethical army). Up the coercion factor and you have a Sympathetic Sentient Weapon.