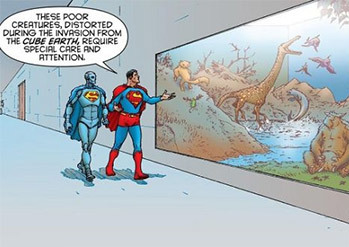 Safely guarded from the Muggle world that's so ignorant and hostile to it, the Fantastic Nature Reserve is one of (if not the) last refuge for mythical beings. Much like the Bazaar of the Bizarre, the Fantastic Nature Reserve will have many species of flora and fauna heard of only in myth and fairy tales. Entire ecosystems may be preserved in lush "biomes," or individual beings kept in cages much like a zoo (which is likely to also have an evil Zookeeper).

It may be hidden somewhere deep in the dark, forgotten places of the world, in the labyrinthine corners of a human city thanks to some powerful illusions, Another Dimension entirely, or even bravely visible to the world at large. If it's hidden, that's because there is safety behind The Masquerade as a Hidden Elf Village, and by banding together they can cooperate to fend off those pesky humans. If out in the open they may hope to survive by raising awareness of their existence, which may be exactly what's called for if the residents are subject to Gods Need Prayer Badly and Clap Your Hands If You Believe.

It's also possible for a Fantastic Nature Reserve to be "person"-made. A benevolent "zoo keeper" likely does this to preserve the Uniqueness Value inherent in these creatures and to protect them from poaching. The less altruistic Collector may justify objectifying these creatures (whether sentient or not) on the basis that they're saving them from destruction. An outright evil zoo keeper will use them as shock troops and as a self replenishing treasure trove of magical ingredients. It's easy to harvest Eye of Newt when you can apply Healing Factor laden troll blood to keep the newt from going blind.