Literature / Village of the Mermaids 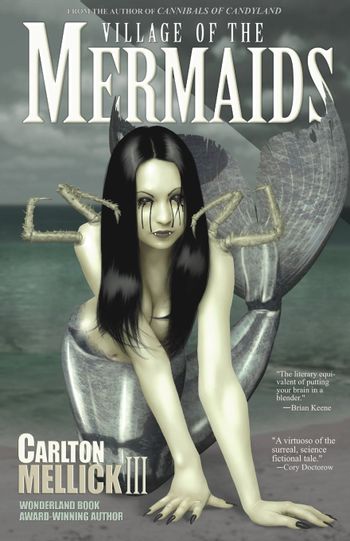 Village Of The Mermaids
MERMAID [mur-meyd] noun — a rare species of fish evolved to resemble the appearance of a woman in order to attract male human prey.
Advertisement:

Mermaids are protected by the government under the Endangered Species Act, which means you aren't able to kill them even in self-defense. This is especially problematic if you happen to live in the isolated fishing village of Siren Cove, where there exists a healthy population of mermaids in the surrounding waters that view you as the main source of protein in their diet.

The only thing keeping these ravenous sea women at bay is the equally-dangerous supply of human livestock known as Food People. Normally, these "feeder humans" are enough to keep the mermaid population happy and well-fed. But in Siren Cove, the mermaids are avoiding the human livestock and have returned to hunting the frightened local fishermen. It is up to Doctor Black, an eccentric representative of the Food People Corporation, to investigate the matter and hopefully find a way to correct the mermaids' new eating patterns before the remaining villagers end up as fish food. But the more he digs, the more he discovers there are far stranger and more dangerous things than mermaids hidden in this ancient village by the sea.

Like a Lovecraftian version of David Lynch's Twin Peaks, Village of the Mermaids is a dystopian mystery that proves once again how cult author Carlton Mellick III brings the weird to a whole new level.