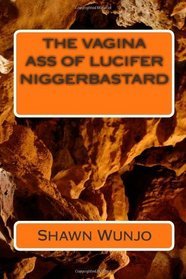 The Vagina Ass of Lucifer Niggerbastard is one of many intentionally profane books by author Shawn Wunjo. It was published in 2010. The book was available on Shawn Wunjo's website: ShawnWunjo.com

, but the site was shut down mysteriously several years ago. The book is now circulated on various independent websites and file sharing networks as a PDF file. The book consists of twelve chapters, each roughly three pages long. It has gained a cult following.

Lucifer Niggerbastard lives a mediocre life, which he hates. That changes one day when Mr. Moneyballs fires him from his job at the Analsausage Fuck Factory. The next thing he knows, he is on a quest among friends to give birth to a nation of Niggerbastards via his prophetic Vagina Ass. The Niggerbastards are said to conquer Italy in about eighty billion years. The evil Latin League, led by Turnus, are all that stand in the way of the Fellowship Of The Vagina Ass. And so, Lucifer, the Burbling Sack Of Babyshit, Rojir The Razor-Bladed Dildo and Prince Pallas have to defeat the evil trio.