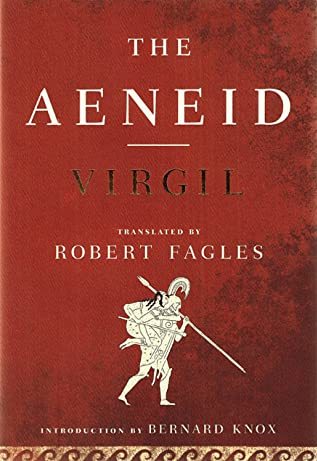 "Arma virumque cano…"
(I sing of arms and of a man…)
— Opening words
Advertisement:

The Aeneid is an epic poem written by the poet Publius Vergilius Maro—more commonly known as Virgil. It's considered one of the great masterpieces of literature, and many later works are deliberately based off the style Virgil used. Of course, Virgil himself was deliberately writing in the style of Homer, his literary hero, also basing his portrayal of certain characters off of stars of The Iliad or The Odyssey.

The Aeneid is a continuation set after the end of The Trojan War, following the story of the Trojan hero Aeneas. Prophesied to found a city whose empire will cover the whole world and rule forever, he travels all over the known world (i.e. the Mediterranean) trying to reach the fated place. After suffering many tragedies and getting kicked out of most places, he realises that the gods want him to go to Italy. When he gets there, however, he still doesn't have it easy: he has to pretty much conquer the whole area before he can settle down.

The city he eventually founds is the one from which Roman founders Romulus and Remus supposedly come. The Aeneid was intended as a propaganda piece for the emperor-in-all-but-name Augustus, who had recently become the supreme power in Rome, then ravaged by civil war, by defeating Mark Antony and Cleopatra VII. Aeneas, who is pious,note Aeneas is often called pius Aeneas. Pius is often translated as pious, but it refers to devotion to not only the gods, but also one's family and country. In the case of Aeneas, his country is the Rome which will eventually exist. dutiful and brave was held as the Roman ideal and is obliquely compared with Augustus at several points in the poem.

Standard material for Latin students; the U.S. AP Latin exam assumes its takers know the story in its entirety.

The poem may well have made some tropes, and used others cheerfully. This guarantees that all those tropes are at least Older Than Feudalism, if built at all. The story also got a continuation of sorts in the form of Geoffrey of Monmouth's Historia Regum Britanniae which has Aeneas' descendant Brutus of Troy sail to England to found a new empire and largely focuses on a certain legendary medieval king from British folklore.